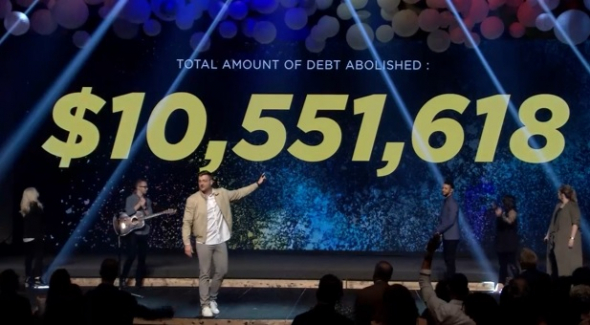 Pastor Stephen Hayes of Covenant Church in Carrollton, Texas revealed during Easter service on April 1, 2018 that the congregation has helped relieve over 4,000 local families of medical debt.

Hayes, the senior pastor of Covenant Church based in Carrollton, told his congregation during his Easter Sunday sermon that thanks to the generous giving by church members, the church had enough extra funds to donate $100,000 to an organization that purchases medical debt for pennies on the dollar and forgives individuals and families of their debt.

“Carry each other’s burdens, and in this way you will fulfill the law of Christ.”

The senior pastor explained that in years past the church had spent upwards of $100,000 to promote Easter services through radio, TV commercials, billboards and mailers. The pastor said that a billboard alone costs about $20,000 to $30,000 per month. This time they designated those funds towards clearing medical debts.

“In the same way, let your light shine before others, that they may see your good deeds and glorify your Father in heaven.”

Hayes said that the church donated $100,000 to an organization called RIP Medical Debt.

However, there were not enough veterans in the area to use up the entire $50,000.

“Right now, there is no veteran in our radius where we minister that will have [medical] debt from this day forward,” Hayes said, adding that many of them suffered injuries caused by war. “It is already paid. Really cool.”

Hayes said 4,229 families in the area will receive letters informing them that their medical debt has been paid off.

Thank God for this awesome church and the wonderful work they are doing for their community.

201 thoughts on “A Megachurch In Texas Has Paid Off Over $10 Million in Medical Debt for 4,229 Families This Easter”