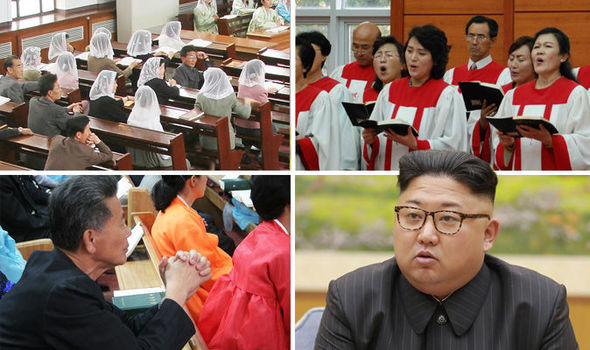 North Korea has been exposed in its bid to boost the recluse state’s human rights record. It was uncovered in shocking new photos that ‘show churches’ are rife with actors pretending to pray.

Pictures obtained by the Express exposed the extent of these sham churches to a huge degree, showcasing the lengths North Korea is prepared to go to to hide its shocking treatment of Christians.

The photos may look innocent on first inspection, but when viewers learn the realities of believing in God in the recluse kingdom, they soon become chilling.

North Korea is believed to be one the worst country in the world to be a Christian, with Kim Jong-un’s kingdom ranking first in a persecution watch-list published earlier this month.

Christians are forced to practice in secret or face imprisonment, beatings or even death if they are caught by Kim’s secret police.

Instead North Koreans aremade to put their faith in only one man – their leader Kim Jong-un – with religion becoming an inconvenient lesson in values and morals.

It is believed that 300,000 North Koreans identify as Christians in defiance of Kim’s regime, with believers forced to worship in secret, sometimes even meeting on park benches to whisper prayers while looking in to the distance.

We can only pray for our fellow brothers and sisters in Christ.