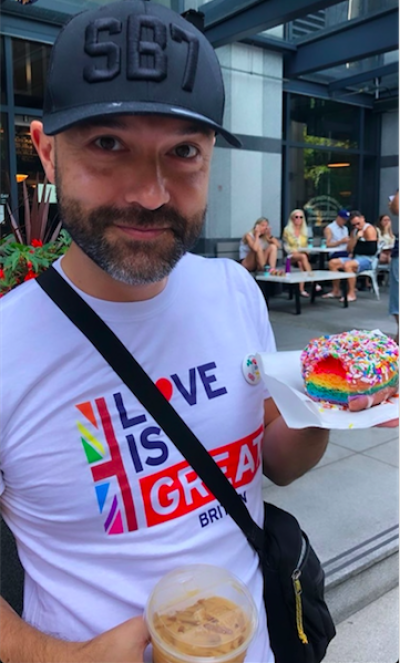 Josh Harris, the infamous self-help author who famously announced he no longer considers himself a Christian, revealed on social media that he attended a Canadian LGBT “pride” parade a week after apologizing to the “LGBTQ+ community” for having espoused his former values.

The author of I Kissed Dating Goodbye, Harris was already controversial for the courtship-like dating model he advocated in his book, which he eventually disavowed. In recent weeks, he announced his divorce from his wife of 21 years, Shannon, then announced that “by all the measurements that I have for defining a Christian, I am not a Christian.”

“An American in Canada marching with the British Consulate in the Pride Parade,” he captioned one photo.

Harris also shared a photo of himself alongside LGBT advocates, including Matthias Roberts, host of Queerology: A Podcast on Belief and Being, and gay rock singer Trey Pearson.

“What’s very sad for me is that Joshua has not only given up on the faith, he’s given up on all of the principles he has stood for so long,” Regent University School of Divinity dean Dr. Corne Bekker told CBN News. “The Scripture says that when we see somebody fallen and trespassed like this, that we should correct them. But do it in a spirit of gentleness. And then watch ourselves as well.”

“My heart is full of gratitude. I wish you could see all the messages people sent me after the announcement of my divorce. They are expressions of love though they are saddened or even strongly disapprove of the decision.⁣⁣
⁣⁣
I am learning that no group has the market cornered on grace. This week I’ve received grace from Christians, atheists, evangelicals, exvangelicals, straight people, LGBTQ people, and everyone in-between. Of course there have also been strong words of rebuke from religious people. While not always pleasant, I know they are seeking to love me. (There have also been spiteful, hateful comments that angered and hurt me.)⁣⁣
⁣⁣
The information that was left out of our announcement is that I have undergone a massive shift in regard to my faith in Jesus. The popular phrase for this is “deconstruction,” the biblical phrase is “falling away.” By all the measurements that I have for defining a Christian, I am not a Christian. Many people tell me that there is a different way to practice faith and I want to remain open to this, but I’m not there now.⁣⁣
⁣⁣
Martin Luther said that the entire life of believers should be repentance. There’s beauty in that sentiment regardless of your view of God. I have lived in repentance for the past several years—repenting of my self-righteousness, my fear-based approach to life, the teaching of my books, my views of women in the church, and my approach to parenting to name a few. But I specifically want to add to this list now: to the LGBTQ+ community, I want to say that I am sorry for the views that I taught in my books and as a pastor regarding sexuality. I regret standing against marriage equality, for not affirming you and your place in the church, and for any ways that my writing and speaking contributed to a culture of exclusion and bigotry. I hope you can forgive me.⁣⁣
⁣⁣
To my Christians friends, I am grateful for your prayers. Don’t take it personally if I don’t immediately return calls. I can’t join in your mourning. I don’t view this moment negatively. I feel very much alive, and awake, and surprisingly hopeful. I believe with my sister Julian that, “All shall be well, and all manner of thing shall be well.””

Let us keep praying for the Harris family!!