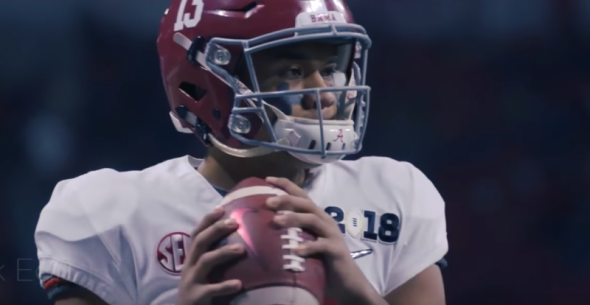 American Quarterback Tua Tagovailoa made headlines this week after he claimed he was speaking/praying in tongues as he played in the National Championship Game and led his team, Alabama Crimson Tide, to victory.

Tagovailoa completed 14 of 24 passes for 166 yards with 3 touchdowns and 1 interception. His remarkable playing led his team back after two 13-point deficits. He also capped off his performance by throwing the game-winning 41-yard touchdown pass to his teammate, DeVonta Smith.

Speaking to Yahoo Sports’ Pat Forde after the victory, he disclosed that he was speaking in tongues throughout the entire game to keep calm during the high-pressure second half against the Bulldogs.

“I was praying,” Tagovailoa said. “I was speaking in tongues. It kept me calm.”