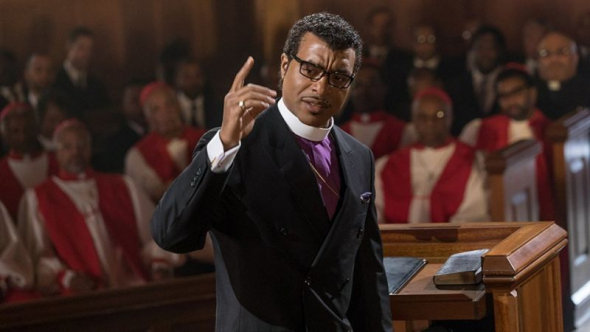 Many people have emailed us asking our thoughts on the Netflix release Come Sunday, depicting the life of Carlton Pearson and wondered why we have kept quiet on the matter. Well, the truth is that we have not kept silent, but rather felt it was important to approach this matter with careful analysis, love honesty and grace.

“Come Sunday,” is a new Netflix film documenting how Bishop Carlton Pearson (played by Chiwetel Ejiofor) went from being the lauded pastor of one of Tulsa, Oklahoma’s largest churches, Higher Dimensions Evangelistic Center, to being branded a heretic in the early 2000s.

I have read commentary from various people saying the church did Carlton Pearson wrong and missed an opportunity to love him back. My answer to this has been;

We are placing so much blame on the church yet ignoring that God has given us freedom of choice. Carlton Pearson made a choice and should be accountable for his choices. Just because the church did not agree with his doctrine, it does not mean that they do not love him. The bible says two cannot walk together lest they agree, in this instance the church/congregation did not agree with his doctrine and decided to part ways and follow truth (The Word of God).

It is possible to love someone and not agree with their choices in life. For those of you who are parents, will most likely agree with this view. If your child is going down the wrong path and misbehaving, you as a parent sit them down and express your concern and the reasons why you believe that they should be cautious in their actions. If that child does not heed your advice, you don’t smile at their naughty behaviour, you try to help them understand the reasoning behind your actions towards them. If they are especially of an understanding age and they choose to still carry on down the wrong path, you wash your hands and pray for them trusting God to do the necessary work but also whilst acknowledging the realism that a person has free will.

Therefore I disagree with the blame that is being placed on the church, because there is only so much you can do with people who are set in their ways. At the end of the day People change but Gods word remains the same. We can not expect the word of God to change due to people’s erroneous ways

The bible talks about people developing itchy ears and I believe that more so now than ever, people want to hear what pleases/tickles their ears and do not want truth. We have a generation of many who have subscribed to a pampered gospel and will do anything to suppress the truth. many are afraid to stand for truth in fear of being ostracised. When will the church wake up and be bold?

One of the best reviews I have read was by Charisma News and here is an excerpt:

“The biggest tragedy in this film involves those who will believe its message. The issue of the ‘no hell’ universalist doctrine is not one of mercy in allowing sinners out of hell or refuting its existence altogether, but it is one of God’s eternal justice that has been forever settled by Scripture. The question should be: Is our sense of justice greater than God’s?

What would you think of a judge who did not uphold the Law? Sin is the transgression of the law (1 John 3:4). It is the transgression or the crime that must be penalized. What if your own daughter was violently raped or your son was murdered? Or your wife, husband, a mother or father? Would you not want justice served? What if a judge cleared the guilty because the criminal’s good works outweighed his crime? Would that hold up in man’s courtroom?

If such a system does not exist in man’s courtroom, would it hold up in God’s? This would not be mercy at all but the gravest of injustices. Yet people think that God’s mercy will automatically forgive man’s sin and allow guilty sinners entrance into heaven. Such an unscriptural mercy does not exist!” CharismaNews 2018

To conclude it all, always remember that God is a loving God but he is also a Just God.