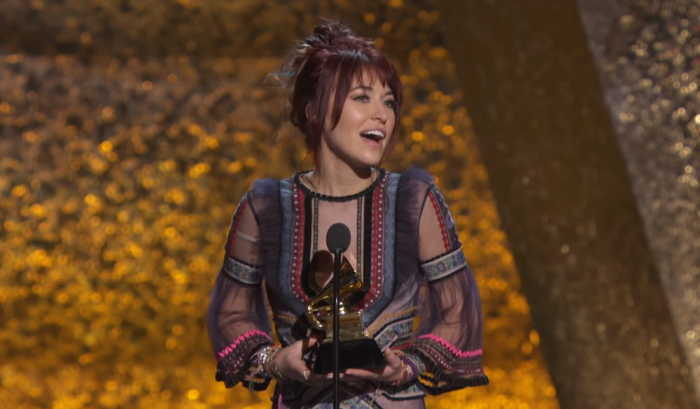 he 61st Grammy Awards took place Sunday and this year contemporary Christian artists who have gone mainstream took home top prizes and are more visible than ever.

Lauren Daigle took home wins for ‘You Say’ and ‘Look Up Child’ at the 2019 Grammy Awards and also joined Billboard among other media houses on the red carpet to talk all about it!

Daigle, who has the current #1 album on Billboard’s Christian chart, won against Best Contemporary Christian Music Album nominees Elevation Worship for “Hallelujah Here Below,” Jesus Culture for “Living with a Fire,” Zach Williams for “Survivor: Live from Harding Prison,” and Michael W. Smith for “Surrounded.”

While it may have been a happy night for some in the Christian/Gospel Genre, many others felt the Grammys snubbed the artist’s who truly deserved the gongs. Christian Artist Smokie Norful took to Instagram to share his thoughts on what many have described as the “Christian Snub”.

Norful said: “Now…no disrespect to Tori or Kirk (who is my friend and brutha and created an excellent cd) but THESE are the true winners in the GOSPEL category for the Grammys. Heavy on GOSPEL. Congratulations to each of you. I’m a bonafide fan of how awesomely God uses each of you.” This was in reference to artist such as @jonmcreynolds @thewallsgroup@todddulaney1 @korynhawthorne@jekalyncarr  @briancourtneywilson

Further adding  “All of your music has blessed and carried me personally. I pray your ministry is never reduced to the size of a statue — your anointing is HUGE. I want to publicly acknowledge the sacrifices, work, prayer, scriptural preparation, and true ministry you offer to the world. You stand on the legacy of many who have remained faithful and labored in the gospel. You are worthy of double honor. AALL the GOSPEL artists. I love you. I appreciate you. God is pleased.”

Many have criticised the grammys for going with whats popular rather than what is right as far as this category is concerned. Norful closed his observation with a bit of banter as he took swipe at the Grammy’s stating: “And who knows, maybe next year they’ll give ME a Grammy for POP music. 🤷🏽‍♂️😏”. This was probably in reference to the fact that, actual christian recording artist’s were snubbed in this category in favour of a secular artist who has recorded gospel music.

Tori Kelly was another big winner of the night and she took to instagram:

“what a wild day. i still don’t know how i was somehow able to soak the tears back into my eyes as i was walking up to accept each of these. dreamed about this since i was a kid. never thought i would get 2 in 1 night. i don’t think i fully even know what happened😂 i just know that i’m so incredibly grateful & will never forget this feeling. all glory to God. (@kirkfranklin YOU’RE MY HERO)”

Other gospel album nominees included Jonathan McReynolds’ “Make Room,” The Walls Group’s “The Other Side,” Jekalyn Carr’s “One Nation Under God,” and Brian Courtney Wilson’s “A Great Work.”

Other nominees were excited to be present for the event. Katie Torwalt of Jesus Culture posted a photo of the group in all smiles at the event.

Do you think the Gospel Category should exist at the Grammy’s? Yes/No and why? Share your thoughts with us in the comments section.