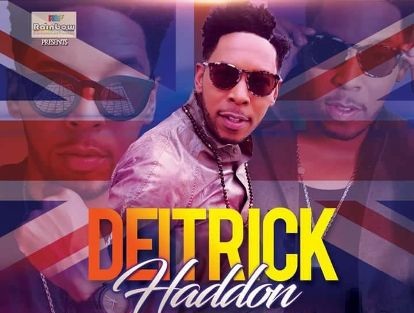 Rainbow Entertainment and Promotions is doing it again. Levels are going higher and higher and the doors are opening further and further. They delivered a “sold out” and very successful event with Ps William McDowell last year in Birmingham-UK and NOW another Gospel Star is heading to the UK in summer – June the 16th In Birmingham- England. For the First Time in Birmingham.

Surely United Kingdom has been highly favored and blessed as we host Pastor Detrick Haddon, He is a Dove Award Winner, 6 Time Stellar Award Winner, 3-time Grammy nominee, Film producer, TV Executive, Song writer, Worshipper-and Pastor of Hill City Church in Los Angeles all the way from United States of America. Pastor Deitrick Haddon is an American gospel singer and is best known for progressive gospel, and contemporary styles of music. He is also one of the cast members in Oxygen’s reality television show Preachers of L.A. 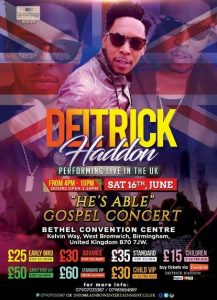 Haddon launched his solo career as a Christian R&B vocalist with the Lost & Found on Tyscot/Verity in 2002. The set peaked at No. 1 on Billboard’s Top Gospel Charts and received wide critical acclaim and spawned the hit “Sinner’s Prayer” which was played extensively on gospel and mainstream R&B radio stations. Amongst other albums he has released in 2017, Haddon released a live LP, Deitrick Haddon & Hill City Worship Camp, led by the single “A Billion People.” And is topping the charts.

Haddon’s talent is not only enjoyed and recognized in USA but across the world. In Addition to that he has been nominated for the Stellar Awards in 6 different categories. A true reminder of Philippians 4:13 which says “I can do everything through Christ who strengthens me”

This has been made possible by Rainbow Entertainment & Promotions. The Concert will take place at the Bethel Convention Centre, West Bromwich on the 16th of June 2018 where Ps William McDowell was hosted last year in February 2017.

Its not the first time Rainbow has delivered said the Director Steve Mpofu who is also a church Pastor. “ We have come a long way and by the grace of God we have been able to Host several big names from America and Southern Africa including Pastor William McDowell, Bishop Benjamin Dube,Dr Rebecca Malope, Pastor Solly Mhlangu and Deborah Fraser just to name a few. These are prominent and respected gospel artists who have served and are loved across the globe; to host Ps Deitrick Haddon its like a dream come true.

Ps Deitrick is well loved and has a following almost worldwide and his music transcends all genres. This is one event that you cannot afford to miss. Only One Show, Only in Birmingham. Tickets are selling fast and they can be bought online. Here is the tickets link below or you can visit our website at www.rainbowentertainment.co.uk