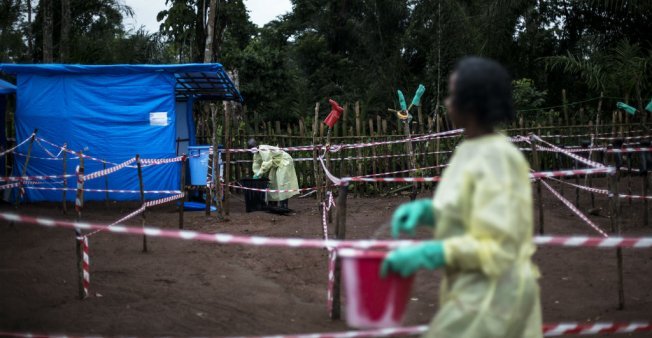 There’s a new outbreak in the Democratic Republic of the Congo.

At least 17 people have died in an area of northwestern Democratic Republic of Congo where health officials have now confirmed an outbreak of Ebola, the health ministry said on Tuesday.

It is the ninth time Ebola has been recorded in the central African nation, whose eastern Ebola river gave the deadly virus its name when it was discovered there in the 1970s, and comes less than a year after its last outbreak which killed eight people.

“Our country is facing another epidemic of the Ebola virus, which constitutes an international public health emergency,” the ministry said in a statement.

“We still dispose of the well-trained human resources that were able to rapidly control previous epidemics,” it said.

Ebola is believed to be spread over long distances by bats, which can host the virus without dying, as it infects other animals it shares trees with such as monkeys. It often spreads to humans via infected bushmeat.

Before the outbreak was confirmed, local health officials reported 21 patients showing signs of hemorrhagic fever around the village of Ikoko Impenge, near the town of Bikoro. Seventeen of those later died.

You may be asking ‘well how is this any of our concern?’ Just one day after DRC’s Ebola outbreak was declared, the head of global health security on the White House’s National Security Council, Rear Adm. Tim Ziemer, left the Trump administration amid a reorganization by national security adviser John Bolton, the Huffington Post reported this week.

The health security team Ziemer was leading has also been dismantled. That means the top White House official who would lead a pandemic response, along with his team, are gone.

We are praying for DRC!

95 thoughts on “Ebola Is Back: 17 People Have Been Confirmed Dead and the top White House official in charge of Pandemics is gone”