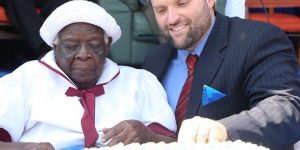 Five-year-old Jason Blanchard first entered Malawi’s Malamulo Adventist Hospital to have his tonsils removed. The U.S. missionary boy walked down a hallway to the children’s ward, passing the maternity ward where nurse and midwife Lisnett Chipyoza was hard at work.

Jason Blanchard returned to Malamulo as CEO in January 2014, 35 years after his tonsils were extracted. On his first day, he walked down a familiar hallway to his executive office, the exact room where he was operated on many years earlier. Shortly afterward, he met up with Chipyoza, who was still supporting and praying for the hospital.

The two met again during the Sept. 8 2015 anniversary celebration attended by a host of government and church leaders, including Malawian Health Minister Peter Kumpalume, Loma Linda University president Richard Hart, and the university’s board chief, Lowell Cooper, who recently retired as a general vice president of the Adventist world church.

Lisnet Chipyoza, 109 is still very strong in body and mind and if you ask her what keeps her strong, healthy and sane in old age, she simply responds “ Pray earnestly, Love the Lord with all you heart, mind and soul and read your bible and meditate on His word daily” and she also says she has been a vegetarian all her life only turning pescatarian in old ages by adding Fish to her diet. As she cut the cake she also didn’t fail to preach as she normally does to anyone and everyone she meets.

“Jesus is really coming again!” Lisnet concluded her short sermon to assembled guests with a. “If you were doubting it, don’t doubt now!”

Her Love for God has not waivered. If anything at 109 she is very seasoned in the word of God and a blessing to be around.

Lisnet Chipyoza and 4 other friends were the first set of Black midwives to officially graduate as mudwives. She joined the hospital as a nurse-midwife in 1925, only 10 years after it opened, and was recognized as the longest-serving employee.

In addition to preaching the short sermon, she sang “Sweet Hour of Prayer” in a strong, clear alto voice to the inspired crowd.

If you would like to find out more about Lisnet Chipyoza email is via the contact page.

Credit: Thanks to Adventist Review Online

Tagged with Adventist, How to be healthy, How to stay connected, How to stay strong, Malamulo, Malawi, Midwife, Old age