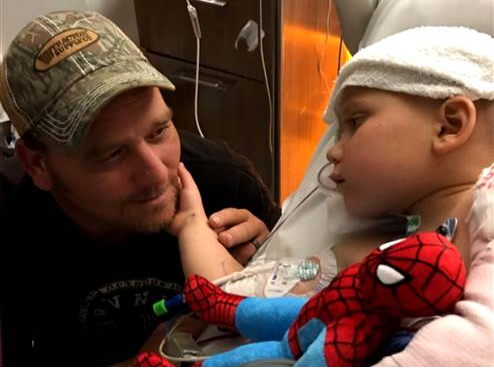 Inside a rural Texan church last fall, a gunman opened fire and among dozens of parishioners who were shot was a 6 year old boy, Ryland Ward. Ward has finally got to go home and was released on Thursday after spending the past two months in a hospital bed. ^ year old Ryland left the hospital in grand style, seating in the front row of a fire truck.

Today reported that On Nov. 5, Ryland was inside the First Baptist Church in Sutherland Springs, Texas, when a gunman opened fire. The massacre left 26 parishioners dead, including Ryland’s stepmother and two sisters. Twenty others were injured, including Ryland, who was shot five times, sustaining injuries that would require multiple surgeries.

his grandmother Sandra Ward told NBC News as reported by Today, just days after the shooting:

“His arm’s messed up where he was shot. His lower intestine, his bladder — it just goes on and on,”

Rusty Duncan a firefighter who was among the first to arrive on the scene, and immediately spotted Ryan among the carnage had said.

“A little hand grabbed my pant leg. I just saw his eyes looking up at me and I knew I had to get him out of there,” he said.

Duncan and his family visited Ryland often in the hospital, promising the boy a ride in a fire truck once the doctors gave him the green light to head home.

Duncan kept true to his word and little Ryland finally got his fire truck ride home.