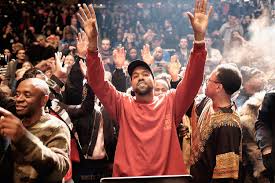 We recently reported that Kanye West seems to be tapping into his spirituality, and it looks like new Christian music could be on the horizon.

Not so long ago, Kanye West’s wife Kim Kardashian, tweeted a picture of Kanye West’s meet-up and hangout session with singers 112 saying ‘so this happened’. In regards to the meeting, 112’s Slim said that Kanye’s “in a real good place,” and they talked about spirituality during their session. Whilst he didn’t confirm that Kanye’s Christian music is definitely in the pipelines, he heavily implied as much, saying “You can take music that’s going on right now and you change it, and you put the lord, Jesus, make it Christian. And it kinda draws the youth to church. You know what I mean? It makes church cool.” It appears they may fuse current sounds and musical trends with the gospel.

Well, it appears that whilst his Christian Music Album maybe roasting in the oven, Kanye West now also leads his very own edition of Sunday Service, I guess you could call him “pastor” West.  Kanye’s very own edition of Sunday Service has become a tradition of sorts in 2019. West held another charged-up rendition on Sunday (Feb. 24), as the 41-year-old took friends and family to church.

The session led by West, who was backed by a roaring gospel choir and drummers draped in all-white YEEZY garments. West stood out amongst the bunch sporting his new multi-colored hairstyle, looking happily right at home behind his ASR keyboard.

A frequent collaborator also spotted was CyHi The Prynce in attendance for the sermon, and is one among those who captured footage of the event. The most prominent clip showcases the Chicago native in position hitting his signature head bob with a thunderous Fred Hammond “This is the Day” sample blaring through the speakers. Fred Hammond later gave his stamp of approval to the flip of the song on Instagram stating:

” #thisistheday I know I’m late but the nephew @ypj Told me about this but when I heard and seen it … um um um 🔥🔥🔥🔥🔥 #kanyewest flipped it! Save the negative comments about this. “Some of the Pharisees in the crowd said to Jesus, “Teacher, rebuke your disciples!” “I tell you,” he replied, “if they keep quiet, the stones will cry out.””
‭‭Luke‬ ‭19:39-40‬ ‭NIV‬‬ “

It remains to be seen if any of the fresh gospel sounds will appear on West’s delayed Yandhi effort. The project is still without an official release date since being scrapped twice in 2018.