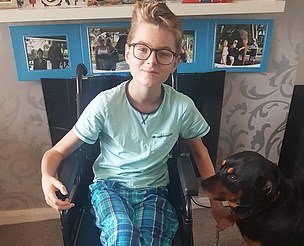 Ciaran Danson, is a young man who is now 15 years old. Dawson is one of the Manchester Terror attacks survivor. Dawson was not physically injured in the attack, but has since developed a disorder, which doctors believe could be related to PTSD. It causes him such severe pain he’s unable to bear anyone touching him.

Danson who hails from Liverpool, developed shooting and burning pains in his left leg shortly after the attack which killed 22 people at an Ariana Grande concert in Manchester.

This pain spread through Danson’s body, leaving him wheelchair-bound. The teenager was later diagnosed with Complex Regional Pain Syndrome (CRPS), which doctors say was triggered by post-traumatic stress disorder.

Danson is currently bed-bound in hospital, having been admitted to Alder Hey Children’s Hospital in Liverpool.

According to MailOnline, Ciaran’s condition has caused him to hallucinate about the events of May 22, 2017, he still feels pain throughout his body and can hardly bear to even hug his mum because of it.

May we remember him and all his family in our prayers.

Complex Regional Pain Syndrome is a condition which can cause extreme discomfort that does not ease up. It most commonly affects people after a previous injury, such as a broken bone, fracture or sprain, with no nerve damage.

The condition is triggered when the body reacts to the injury much more strongly than usual, often making the pain worse than the original injury.

The cause of CRPS is still unclear, though it’s believed to be connected to nerves in the affected area becoming more sensitive, even if they weren’t damaged, which can change the pain pathways between the limb and brain.

Strokes or multiple operations can trigger the condition, but in one in 10 cases there is no obvious cause.