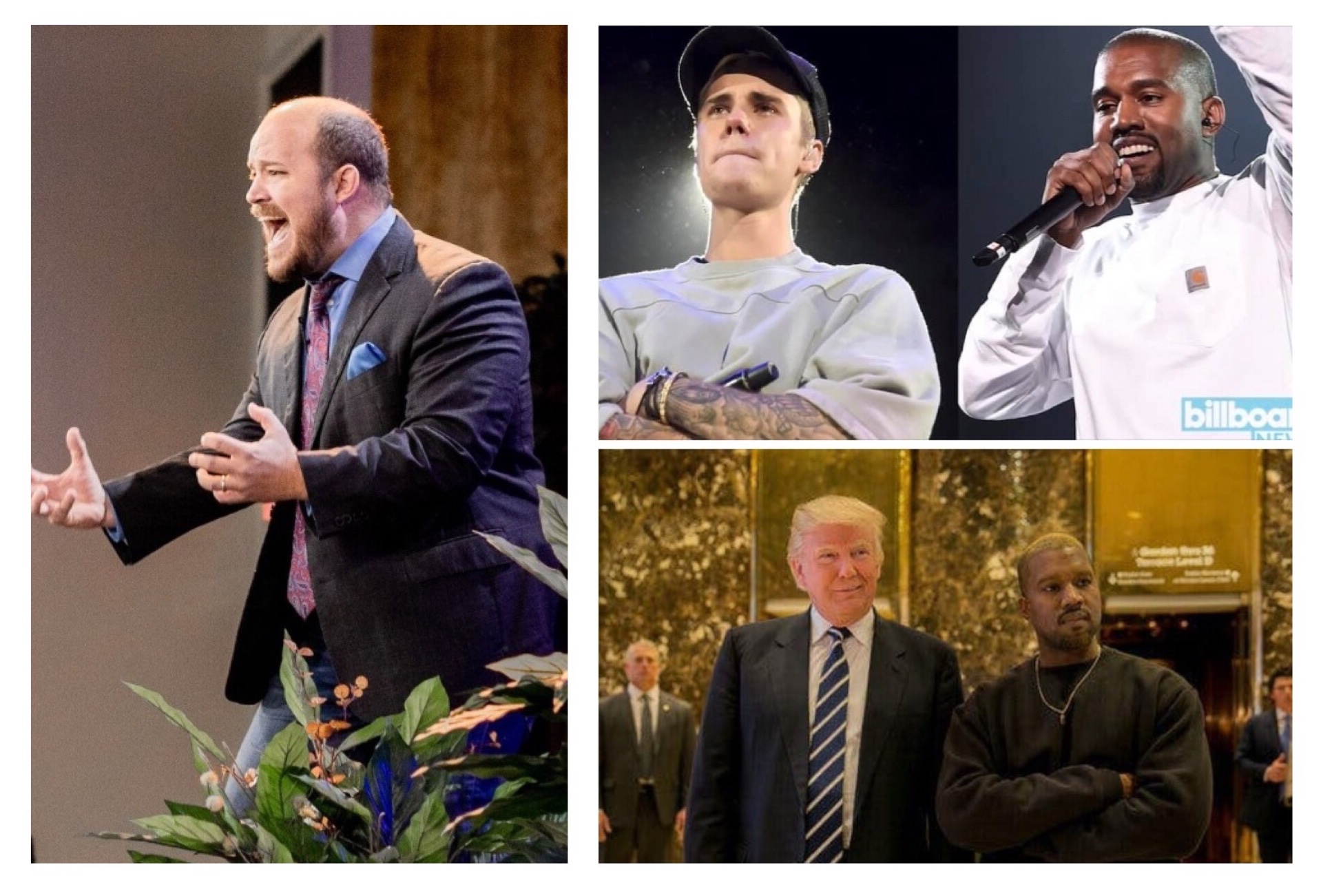 No additions or subtractions, this is what Jeremiah Johnson shared on his facebook.

Meet Donald Trump, Justin Bieber, and Kanye West. Three men anointed by God Himself that are and will shape and shift the political, media, and religious landscape of America in the days ahead.

I know. These guys? Have you lost your mind Jeremiah? No, but I did have a prophetic dream and encounter on 9/15/19 that has convinced me beyond my own opinions and beliefs that God has chosen these three men to be incredible wrecking balls to American religious, media, and political beliefs and ideologies.

“In the dream, I joined thousands in the audience as Donald Trump and Kanye West took the stage and began to share about their faith. It was raw, it was infantile, and they said some things that you would never hear at a traditional church service. As they shared, I was intrigued because half of the crowd appeared saved but was literally manifesting demons. They shouted, pointed their fingers, and accused. They did not believe that these two men were in any way qualified to speak for and about God. They demanded these men be much more spiritual and articulate concerning spiritual matters than they were actually capable of.

The other half of the crowd that gathered was deeply touched and moved to tears. It was stunning.

As the tension and division in the room escalated, Justin Bieber walked out on stage and the crowd was thrown into utter chaos. Again, half the crowd went wild in ecstatic cheers that Bieber had come out to sing and share about his faith and the other half of the crowd was so irate they starting rioting. The atmosphere became so toxic that the gathering was forced to be shut down.

“In the midst of the frenzy, I pushed my way to the front of stage to try and get the attention of one of them. I found all three were in tears, deeply wounded by the response of half of the crowd who caused the riot and meeting to be shut down. When I gathered them up, I started prophesying to them. This is what I said to each one:

“Kanye, just as the Lord raised up Donald Trump to be a wrecking ball to this nation, so God has raised you up as another wrecking ball for such a time as this. Trump has wrecked the political landscape in America, but you shall wreck the religious one. You both will not say and do many things that the Church will demand, but heaven has designed it this way. There is a spiritual father you must connect to, a pastor that will take you underneath his wing and protect you from the masses. For the brood of vipers will seek to crucify you ahead your time.”

“Justin, how long will you waiver between two opinions? How long will you run from Jezebel? For the spirit of Elijah is resting upon you son to turn the hearts of fathers back to their sons. Out of your own brokenness and pain, there shall be a fresh anointing flowing through you that will heal many. You shall be a wrecking ball to the main stream media as you introduce them to the heart of the Father. Like David, you shall sing and prophesy over a generation the love and mercy of God that endured forever.”

“Donald, I have given you Kanye and Justin as gifts to help bring a greater influence that you will need heading into the 2020 elections. Keep your eyes on Israel and China as I will continue to give you great wisdom that will bring tremendous increase and protection in the days ahead. Like King Josiah, you must not fight battles that are not yours to fight. Allow me to fight the deception taking place in the political arena in America. For I am moving in the media and the Church even now”, says the Lord. Then I woke up.

May those who have ears to hear and eyes to see begin praying for Donald Trump, Justin Bieber, and Kanye West like never before. They each have a very significant assignment in the days ahead and the opposition will be fierce, especially among the religious. Each of them will not do and say as many will desire, but we must seek to recognize heaven’s mandate in this hour.

What are your thoughts, please share in the comments section.

102 thoughts on “” Meet Donald Trump, Justin Bieber, and Kanye West. Three men anointed by God Himself that are and will shape and shift..” Says Jeremiah Johnson”