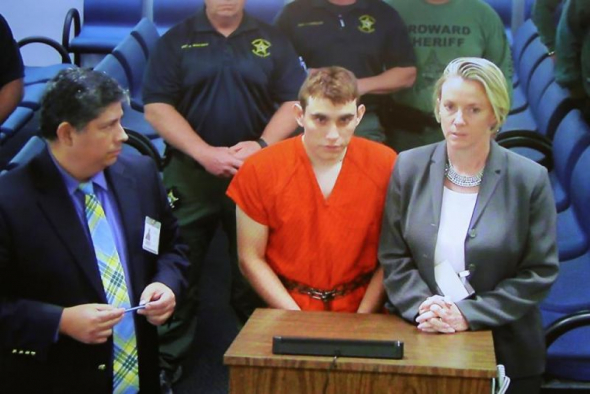 “Troubled” 19 year old Nikolas Cruz, who has been charged with the premeditated murder of 17 people at his former high school in Parkland, Florida, told authorities that “demons” gave him instructions on how to commit one of the deadliest mass shootings in U.S. history.

Arrest records published by The New York Times  state that; Cruz admitted to being the school shooter and said he entered the school campus armed with an AR-15 “and began shooting students that he saw in the hallways and on the school grounds.” He said he also brought additional loaded magazines to the school which he kept hidden in a backpack until he began his attack.

It is said Cruz bought the AR-15 used in the massacre at Sunrise Tactical Supply in Coral Springs just three days after his last day at the school on Feb. 11. He picked it up one week later on Feb. 18, 2017, following a background check, an attorney for the gun store owner, has said. According to the Broward County Sheriff’s Office, and Fox.

Cruz passed a background check despite having a history of violence and mental health concerns.

Sunrise Tactical Supply owners Michael and Lisa Morrison announced through their lawyers, Stuart Kaplan and Douglas Rudman, on Thursday that the store has now been closed indefinitely.

The store owners said they had no reason to believe that Cruz was mentally disturbed or was even capable of carrying out a massacre.

Acoording to Christian Post: Amanda Samaroo, whose daughter, Elizabeth, attended Marjory Stoneman Douglas High School while Cruz was a student there, told The New York Times that he was expelled for bringing knives on campus.

“Her friends have said he was known to always be mentally ill and would kill animals,” Samaroo said.

Victoria Olvera, a 17-year-old junior, told USA Today that Cruz was expelled last school year after a fight with his ex-girlfriend’s new boyfriend. She said Cruz had been abusive to his girlfriend. Mathematics teacher Jim Gard said Cruz had been obsessed with a girl “to the point of stalking her.”


How did the system overlook his behaviour pattern?

We are praying for all families affected by this tragedy that could and should have been avoided.

72 thoughts on “Nikolas Cruz Says ‘Demons’ Told Him How to Execute Victims at Florida High School!”