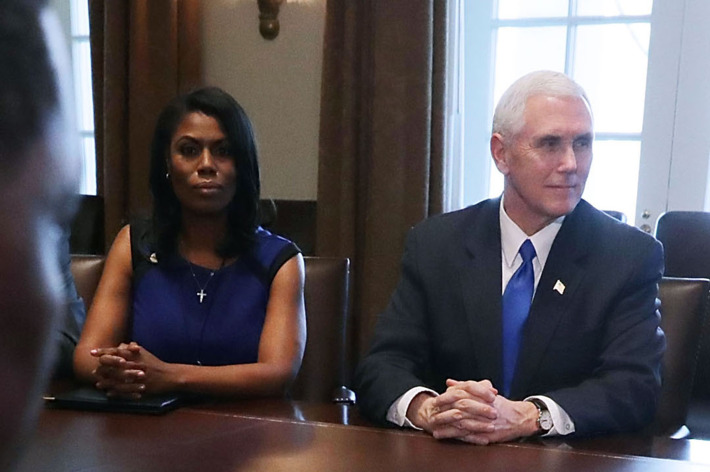 As some of you may be aware, former reality star turned White House aide then again turned reality star Omarosa Manigault is a contestant in the current Celebrity Big Brother and it would appear she is still going strong, relying i guess on her game plan to “spill tea” as young people call gossiping these days.

Omarosa declared on the show that she wouldn’t vote for Donald Trump ever again “in a million years,” and also chimed in that she believes a Mike Pence administration would actually be worse.

“As bad as y’all think Trump is, you would be worried about Pence,” she stated. “So everybody that’s wishing for impeachment might want to reconsider their lives. We would be begging for days of Trump back if Pence became president.”

But why is she saying all this?

“He’s extreme,” Omarosa said of the vice president. “I’m Christian. I love Jesus. But he thinks Jesus tells him to say things. I’m like, ‘Jesus ain’t saying that.’ ” Apparently Omarosa is not only a reality star, she is also a supposed ordained minister.

As a neutral perspective contributor to this site, I find it quite odd that she as a supposed ordained minister would think it strange that Jesus actually still speaks to His people.

Another contestant of the show, Ross Mathews said of Omarosa, “Every time she opens her mouth, I’m, like, ‘Is she going to drop a bomb?’ ” And the answer, of course, is yes. It might be a part of the former senior White House aide’s strategy. Who doesn’t want to hang around and gossip with the woman willing to spill all the political tea on her former boss, who just so happens to be the leader of the free world?

Well since this is a christian site and our stand is from the word of God, we would like to know what Omarosa thinks about gossiping as God detests that. So it may be easy to see a speck in someone else’s eye ignoring the log in one’s own.

Its easy for her to judge Mike Pence, but who is to say whether or not Jesus really speaks to the vice president. Let us be careful about quickly judging others.