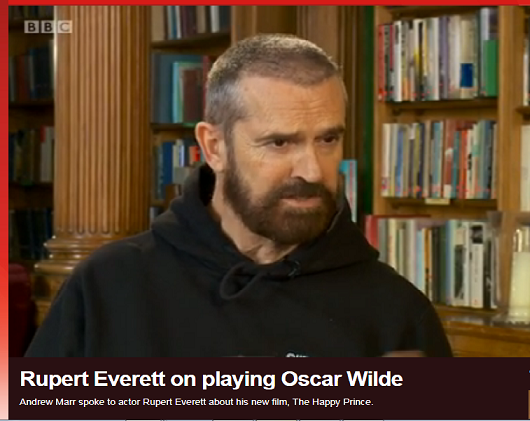 Oscar Wilde was “better than Christ” because he was more convincingly human, the actor Rupert Everett has said.

Everett, who plays Wilde in his new film The Happy Prince, said that he found the weaknesses of the late writer “tremendously appealing and touching”.

Asked about Wilde’s reputation as a “gay Christ figure”, Everett said: “For me, he’s better than Christ because he’s half God with his talent, and his human side – which Christ never quite pulled off except having his feet washed by Mary Magdalene – is very human.

“Greed, ego, vanity, snobbery. All the things that brought him down, I find tremendously appealing and touching, because most of us have all these qualities and most of us get away with it.”

After complaints were raised about the BBC’s involvement in the matter at hand, this is the best response they could come up with and it is not acceptable.

Thank you for contacting us about The Andrew Marr Show on June 17.We realise you were concerned about the tone and content of the interview with Rupert Everett. We’re sorry to hear this section caused offence. Rupert Everett has raised the subject of Oscar Wilde as a ‘Christ-like’ icon in previous interviews – reflecting on popular adulation and punishment. He returned to this aspect of his own approach to ‘The Happy Prince’.

While his comparison may not be appreciated by all, we felt it was a key segment of the feature. It’s not uncommon for various figures in the arts world to be compared to well-known figures in Christianity, including Jesus himself. We’d hope this reflects the familiarity with those figures in our culture, rather than a lack of respect for the faith and its followers.

Andrew was aware that the topic was sensitive and his remark was meant as a light-hearted conclusion in that vein. We note you found it added further to the hurt felt. The programme team have discussed this with your feedback in mind. We’ll make sure that your comments are taken into consideration when we conduct further interviews on similar topics.Thank you for sharing your reaction with us.  Kind RegardsBBC Complaints Teamwww.bbc.co.uk/complaints

We are encouraging all our readers to email the BBC and let them know this is unacceptable and as people of faith we refuse to be bullied just because our religion is a peaceful one. At the end of the day to whom much is given, much is required and we have to be careful how we handle this power and influence given to us.

Please Feel free to leave your thoughts in the comments, and we will compile them and send then to the BBC.