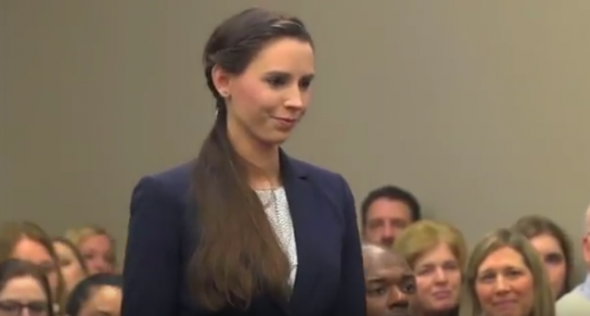 Rachael Denhollander, was the first woman to come out publicly accusing former Team USA Olympic gymnastics doctor Larry Nassar of sexual assault. Larry Nassar was a wonderful doctor – or so they said. Little girls were told to trust him, sent to him and told it was an honour. Parents were told if Nassar would treat their children it was a sign they were destined for greatness if he treated them.

Regardless of the evil that he did and the heartache he caused the girls and their families, one of his survivors Rachael Denhollander used the opportunity of reading her victim impact statement by citing the Bible to chastise his actions and also proceeded to preach the Gospel to him. Denhollander appealed to Nassar letting him know that grace and hope is still made available for him, the man who assaulted her and many others as she talked about the sweetness of the gospel of Jesus Christ stating.”And that is what makes the gospel of Christ so sweet. Because it extends grace and hope and mercy where none should be found,” she said. “And it will be there for you.”

When Nassar arrived in a Michigan court for his arraignment for 22 counts of first-degree criminal sexual conduct in February 2017, he carried a Bible at his side. Denhollander used that moment as an opening to addressing Nassar and preaching to him as she said:

“In our early hearings you brought your Bible into the courtroom and you have spoken of praying for forgiveness. And so it is on that basis that I appeal to you,” further stating; “Larry, if you have read the Bible you carry, you know forgiveness does not come from doing good things, as if good deeds can erase what you have done,” she said. “It comes from repentance which requires facing and acknowledging the truth about what you have done in all of its utter depravity and horror without mitigation, without excuse, without acting as if good deeds can erase what you have seen in this courtroom today.”

Denhollander went on to quote scripture found in Luke 17:2, Matthew 18:6 and Mark 9:42, letting Nassar know how grievous his offenses were. The most obvious question this case has left on many people’s minds is: how could this have ever been allowed to happen? How could USA Gymnastics have required hundreds of girls under its care to submit to mandatory treatment from a man who would give them “pelvic exams” in their hotel or dorm beds at night, wholly unsupervised? And how could the complaints about him have been dismissed for so long, as detailed by the gold medallist Aly Raisman in her unforgettably blistering testimony?

This should serve as a reminder to all those in authority to never abuse their powers.