A child should never have to worry about anything much in life. However, since this is life and with it comes many hurdles we have to jump therefore looking at it from realistic scope, we find kids do encounter worry. Worry about whether their friend will still play with them,like their dress, shoes or hair. I guess that is a reasonable worry although a burden in itself.

Whilst kids are burdened with such worries, worries they should never have to cope with are bills, or health issues. Yet, that was not the case for five year old Janessa Sims who one autumn night last year woke up coughing violently and sputtering. Something was extremely wrong with her, and even at such a young age, she knew she needed help and fast.

This was an asthma attack, and it wasn’t Janessa’s first. Without help, she knew she would be in serious trouble. She hopped out of her bed and rushed down the hall toward her mother’s room as fast as she could. Shaken awake by her daughter, Amber immediately reached for an albuterol nebulizer. In a panic as she was woken from deep sleep, Amber set up the nebulizer, but the contraption took some time to set up. In those precious minutes, however, she noticed that her daughter had already started turning blue.

Amber called out to her mother Janet who was down the hall in another room, asking for help as she is CPR trained. Janet realising the depth of how bad the situation had turned dialled for 911 as Janessa had stopped breathing. When the first responders arrived, the situation looked grim: Janessa’s heart had stopped completely. “You can just tell, especially with a child,” Officer Rodriguez said. “No pulse, the color in her face, and there’s no breathing.”

The first responders didn’t call it quits, however. As soon as the EMTs arrived, they carried Janessa’s tiny body to the ambulance, determined to bring her to the hospital before it was too late. Janet, fearing the worst, simply “shut down.” Thank God for the persistence of the first responders and EMTs because the ambulance’s equipment allowed the medical professionals to open Janessa’s airways, giving her much-needed oxygen. They rushed her to St. Joseph’s Regional Medical Center, where, they soon learned, the trouble was only just beginning. Unfortunately, because Janessa had gone so long without oxygen, there was a good chance that she’d suffered serious brain damage. Her doctors had no choice but to take drastic measures and place her in a medically induced coma for a month.

Sometimes life will send us angels and we don’t even take note. Because while Amber and Janet spent time looking after 5 year old Janessa in hospital, Sergeant Smith one of the first responders, visited Janessa’s home to help Janet’s disabled husband, Andrew. The EMT even brought him dinner one night! The incident, Sergeant Smith said, touched him personally because his own two-year-old son recently had an asthma attack. The other first responders also made frequent visits to Janessa in the hospital, offering comfort to the distraught family.

While this may seem straight forward for most adults, please remember this is a young child, and not only that:

For Janessa Sims, October 23 2017, was a horrible day and Asthma had its own meaning. Janessa woke up violently coughing. She tried calming herself down with a few deep breaths, except that did not help as she could barely breathe. All she could do was make dry gasps for air, but even at such a young age, she knew what was wrong.

What do you do when someone is having an asthma attack?

Asthma attack: 6 things to do if you do not have an inhaler with you.

We hope this information is helpful. Please remember this is just a guide and if in trouble, seek medical help.

We are also happy to report that Janessa is much better now Here she is with her First responders. 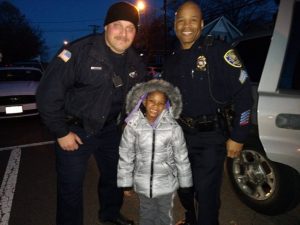