The 2018 Met Gala has some rubbed the wrong way due to its “Blasphemous” theme that mimicked Roman Catholic and Christian Imagery. It featured various celebrities dressed in pleasant and mostly unpleasant manner, leading some to believe that the event was sacrilegious.

New York’s Metropolitan Museum of Art held its annual gala Monday evening, with the theme being Catholic and Christian imagery. In keeping in line with this imagery, singer Katy Perry dressed as an angel with large wings, actress Sarah Jessica Parker wore a Nativity scene on her head, and Rihanna wore a miter. 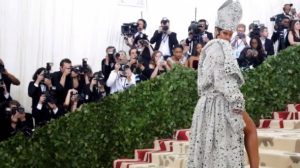 The Met Gala was trending last night, but not all for the right reasons. Controversy filled most of the comments on social media, with some arguing that the Christian/Catholic-themed fashion was blasphemous and disrespectful.